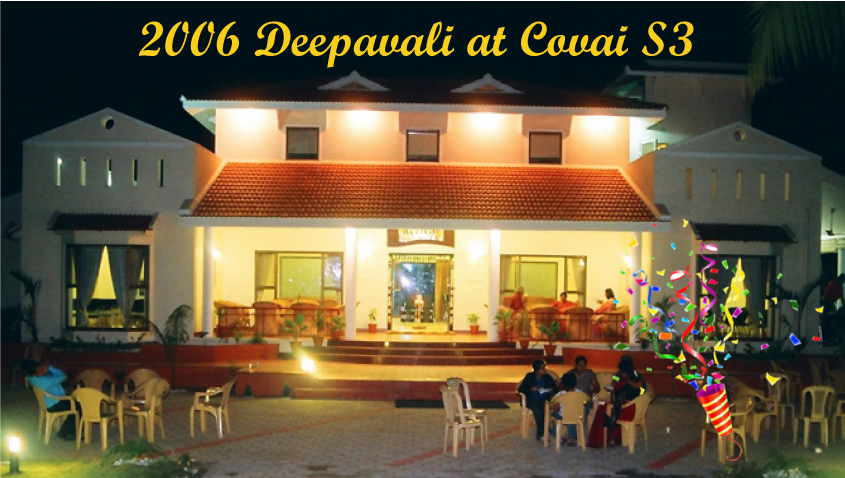 Time flies. On Deepavali 2020, as I write this blog, I realise that I have moved from Diwali of 1960 in New Delhi to Deepavali of 2020 in Coimbatore – just 60 years! And, from the noisiest Diwali that I looked forward to in the 60s, I now yearn for Green Deepavali in Coimbatore. This pandemic has made me avoid even going to the market, leave alone for buying crackers or sweets!

Circa 1961.New Delhi. By birthplace. My father used to give me Rs 100/- (I was the eldest in our family) for buying crackers. In 1962, we did not celebrate Diwali due to the Sino – Indian War, when we suffered so many causalities. Every year until I passed out of school and went to National Defence Academy as an army cadet, I enjoyed Diwali to the hilt!

I realised the value of money then. My best friend Narayanaswamy or Jyothi as he was called by his parents, and I used to drive our bicycles with a haversack on our backs, to Sadar Bazar and buy crackers on whole-sale rates! We got two haversacks full of crackers for Rs 100/-.

We kept the crackers in the sun for at least 12 hours for it to lose any moisture that it could have got accumulated on its journey from Sivakasi in Tamil Nadu to New Delhi! My mother used to begin making sweets and savories for the family and friends. Yummy! No Krishna Sweets those days! All festivals were eagerly awaited, especially Deepavali and Krishna Jayanthi! Of course, Legium, the home made Deepavali medicine to digest the feast, sweets and savories! I cannot imagine that I could eat so many sweets, savories topped up with a feast!

My mother used to wake us up by 4:30 AM and would ask me to burst a cracker to commence the celebrations that began with “Ganga Snanam” actually Jamuna River water that came in the taps. She used to place little bit of oil on my head as we were supposed to take oil bath. I never understood why the day had to begin with a cracker. Shashtram was the answer I got from my mother. In ancient days, they did not have crackers. It is a much later invention by the Chinese. Of course, we had various “Bhaans” or missiles (including some which were anti- missies!) in the battles that we fought in our mythological stories.

Remember the tele serials Ramayana and Mahabharat brought to our living rooms by Ramanand Sagar? The traffic on the roads came to near standstill during the telecast of these two serials. I have seen old uncles of mine sitting in front of the TV with total reverence whenever Ram or Sita or Hanuman came on the screen. Ravana was cursed! I would not be wrong if I say that many of us learnt about these epic stories from the TV serials. Only a few among us took interest to read (not understand or follow) Ramayana and Mahabharat in English as many of us never learnt Sanskrit. I am one of those who read the epic stories in English. I took Tamil as my optional subject in my school up to class 8 in New Delhi and not Sanskrit, since my parents wanted us to know our mother tongue! Now we have modern day version of Mahabharat titled “Jaya” by Devdutt Patnaik, the famous author, who teaches management by linking it up with our mythological stories.

We had to have bath, go to the Pooja Room, pick up our new clothes and wear them before sunrise! Shopping used to be fun for Deepavali. Window shopping was more fun before actual shopping! Mother was strict with budget but father who rarely came for shopping, was more generous! Fathers are generous! Ask our daughters – they always wanted me to come with them for shopping as my wife was strict with money! Our two daughters and I used to go for cracker shopping without Chitra, as Chitra would not want us to “burn money like coal”!

One thing has not changed then and now. Roads are meant for bursting crackers and the day after Diwali, the amount of garbage in front of a house indicated how much money was spent on bursting crackers! It was status symbol! The Aryan and Dravidian divide can be noticed as Deepavali of South is known as Diwali in the North. South Indians burst crackers early morning and did not let their neighbours sleep! In the North, Diwali is celebrated at night, lighting Diyas and bursting crackers and lighting up the sky! We had Choti and Badi Diwali. Choti Diwali is the day prior to Diwali! In the North, brothers visit sisters in their homes a day after Diwali. It is known as Bhaiya Dooj! We have none of that custom in the South! In the South, brother is supposed to gift his sisters for Pongal, which is Baisakhi in the North! When I earned my first salary of Rs 472/- (a princely amount those days!) in the army as a 2 Lieutenant in 1969, I gave my sister Rs 50/- for Pongal! Over a period of time, it has been increased to Rs 2,000/-, due to inflation and decreased purchasing power of the Rupee! Chitra always reminds me to send money to my sister for Pongal! An obedient sister – in- law!

We had to visit our near friends and relatives. It was ensured that they were at their homes when we went and we, when they visited us. We had to show-off our new dress, jwellery etc. to each other, taste or exchange sweets and savories! It was always Kanchipuram Pattu pudavai (sari) for my mother and ‘pavadai and chokka” (Gagra and Choli!) for my sister. Poor father used to be in Veshti (Dhoti) and shirt! We brothers got shorts and shirts (What else!). We friends broke up for lunch to our respective homes! Sweets and savories were snacks in between the meals. By dinner time, we were tired and could hardly eat! Legium was our digester!

By mid-day, crackers got almost burst except some saved for bursting at night with the neighbours! I see that customs in the South has changed. Now, we burst crackers from early morning till almost midnight! A great Ayran – Dravidian muhabhat – at least in bursting crackers!

Our daughters enjoyed Diwali when I was in the army. Be it peace station or field area, be it New Delhi or Siachen, in the armed forces, we celebrate all festivals of all religions. In forward areas or borders with Pakistan, we did not get crackers to burst. We had training grenades instead! But we could fire our mortars and artillery guns or MMG or HMG with tracer bullets towards Pakistanis! It used to be colourflul with noise and light! Of course, they used to return the fire and, it added to more noise, light and fun!

In our military cantonments, we always had Diwali Dance and dinner in the Club a day or two prior to Diwali. Diwali was celebrated in our apartments in the cantonment with friends and colleagues from the battalion or regiment. Children burst crackers and parents enjoyed talking with friends and neighbours, laughing over wine or whisky! Of course, we took all precautions for a safe Diwali. With the entire cantonment lit up, rockets lighting up the sky, crackers making noise, it used to be great fun. None worried about pollution those days. Now we are supposed to have green Diwalis and Laser shows! Sitting in my apartment today, I can hear so much of noise and see the sky also lit up, I wonder who says that our economy is doing badly consequent to the pandemic!

1995 . We began our post “retired” life in our house at Kovaipudur, Coimbatore. A house built with love, it had lovely lawns, garden and strategically located. Our daughters Deepa and Divya were in school and the three of us used to go to the Air Force Canteen to buy crackers. Chitra was always made busy at home! The boot would get almost full of crackers – more of rockets, anars etc., and less of noise variety. Our friends Sabithaji and Raman Sir, Ramesh Kumar, Swathi, Keerthana, Keshav, Lt Col SK Menon, Bindu and Kuttu, Lt Col Ravi Menon and Sulochana were the regulars who came to our house to celebrate Deepavali. The house and the garden used to be lit up with lights and Diyas all over. Our friends from the colony who used to go past our house will invariably stop, exchange greetings spend some time and then only go. We had the bar open and Chitra served lovely snacks and juices etc. Safety precautions were ensured and the oldest of the children, Kuttu, was made the leader in chief to burst the crackers with the children!

By 2006, when we shifted to our apartment Madhuban in the city that we built, Deepa and Divya had gone away to college in New Delhi. We used to unite during Deepavali but in later years since both of them went abroad to study, Deepavali became subdued.

In 2006, we inaugurated our first Comfort and Retirement Homes in Coimbatore. Deepavali celebrations with our residents became a hit. Many of their children used to visit parents at this time. We used to get crackers for over Rs 25,000 from Sivakasi. The Retreat, the Open-air Theatre, gardens etc., were lit up. Most of the crackers were rockets, anars, Sprinklers etc. which our senior citizens used to light and bring out their joy as a child would do!

The evening of cracker bursting commenced with a 10,000 string of crackers lit by (Late) Smt Rajeshwari. Ramachandran and I used to be her escorts – to light the cracker, lift her and bring her to safety. I Even today, I can see he laughter from her without any teeth and the twinkle in her eyes appreciating her great achievement! Until her death she always lit the 10,000 – walas.

Even in Madhuban apartment, we enjoyed Deepavali from our terrace. I used to take two boys from the apartment to the Air Force Canteen and load up my car with crackers. All kids and parents assembled in the terrace by 6 PM. Soft drinks, sweets and savories were served. Bar was open! The crackers were kept at a safe place for the children to take. Some of the senior boys took charge so that accidents could be avoided. We enjoyed the night sky lit up so well from the terrace.

But for the past four or five years, we started celebrating Green Deepavali. No crackers or fore works. Only lights, song and dance and enjoy. While many school children have switched to Green Deepavali, there are enough who would not let go of the traditions and give up their joy of festival of light – with crackers, of course. This year the cracker sales were reportedly poor, but the continuous noise of crackers bursting and night sky being lit up did not give that impression. Many State Governments had banned firecrackers. Did the ban work? Chances are they did not. Remember prohibition. It has not succeeded anywhere – even in Gujarat and Bihar in India!

The future of bursting crackers will decrease when more and more children start celebrating Green Deepavali. My days of celebrating Diwali or Deepavali will also fade with me!